Skyrunning UK is pleased to announce that ROCKTAPE will be the first sponsor to support the Skyrunner® Series UK.

Just like all our participants in the Skyrunner® Series UK, the ROCKTAPE team are avid athletes.  ROCKTAPE already supports various UK based events and athletes in a variety of sports; notably Ultra runner and Lakeland 100 winner Terry Conway and Salomon International athlete, Anna Frost.

No matter how carefully we prepare and train, injuries happen and unfortunately they can happen on a frequent basis, especially when pushing at the limits.  ROCKTAPE is not just for the injured athlete, it can also be used to help delay fatigue and improve posture/running form.

Today, ‘Kinesiology Tape’ is widely used throughout the world to treat injuries and pain. ROCKTAPE is the only tape specifically engineered to meet the demands of elite athletes. Why is it unique? Stick and Stretch.  Its unique glue means that unlike many other tapes ROCKTAPE stays on the skin come hell or high water. ROCKTAPE stretches twice as much as most kinesiology tape and is engineered to mimic human skin. The ‘stretch’ is the secret behind ROCKTAPE! 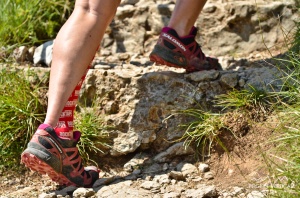 How does it work? When applied properly, ROCKTAPE lifts the skin away from the muscle, which promotes positive changes in the body’s fluid, mechanical and neurological systems. Commonly people wearing Rocktape report less pain, swelling and tightness, greater awareness of the area and later onset of fatigue.

Paul Coker, Medical Director, Rocktape UK explains, “We are really pleased to be able to support the Skyrunner® UK series in its inaugural year, we hope it’s the beginning of a long term-relationship. ROCKTAPE offers lots of great benefits to runners, this partnership is a perfect way to showcase our product and increase awareness of ROCKTAPE amongst the trail and ultra running community.  As a very enthusiastic but distinctly average runner myself its also a great reason to be at Sky races and witness some of the worlds best athletes run.”

Skyrunning UK is well aware of the benefits that may be obtained both pre-exercise, during exercise and post exercise from ROCKTAPE.

“We strongly believe that our partnership is a great step forward not only for the Skyrunner® Series UK but also all our athletes who will perform in our series” explains Ian Corless, Director of Skyrunning UK “Paul and myself have had plenty of communication over the past 2-years. I have used ROCKTAPE to help recover from injuries and I have also used products in training to prevent onward injuries. I fully understand and believe in the product. It’s great to have a sponsor on board that will directly benefit every participant in a Skyrunner® Series UK event. Why is this? Well, ROCKTAPE will be present at our events and provide on hand advice, show taping techniques and directly get involved with each and every runner. It’s a really exciting prospect.”

The 2014 Skyrunner® Series UK is developing each and every day. Skyrunning UK has already announced two ULTRA events, the V3K in Wales for June and the 3×3 in the Lakes for October. With the imminent announcement of new events to the 2014 calendar and the sponsorship of ROCKTAPE the Skyrunner® Series UK is already proving to be one of the most exciting race series prospects for those who love to run over technical and demanding terrain with plenty of vertical gain within the UK.