Chris Baynham-Hughes writes about the 2016 Skyrunning UK V3k, the first race in the 2016 series.

The V3K kicked off the Skyrunning UK series in style as over 200 competitors toed the line to tackle the Welsh 3000 footers. A spectacular point to point route taking in the classic 15 tops challenge over three mountain ranges. A mixture of nerves and excitement filled the briefing room on the Friday night; it was fantastic to feel the warm buzz in the room from friendships forged over previous races getting together in this annual pilgrimage for old and new members of the Skyrunning UK family.

Northern Snowdonia is a truly special place. The three mountain ranges each offer something very different to each other, but somehow connected in a way I’m yet to feel elsewhere. The Snowdon range presents a dichotomy of benign well kept trails and unforgiving knife-edge exhilaration, whilst the Glyderau deliver Tolkien’s journey to Mordor in the shape of splintered boulders, disorientating dead ends and ultimately Mordor itself… Tryfan. The Carneddau somehow manages to leave behind so much of this unforgiving rocky landscape and delivers a much grassier ridge-line that can leave the most experienced of navigators rueing a lapse in concentration when the fog is down. 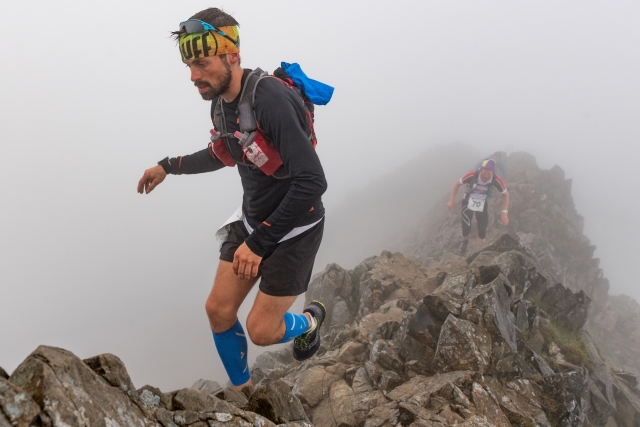 On the day it was the fell racers that set the pace with last year’s winner Gareth Hughes, Michael Jones, Mark Davies and Bjorn Verdujin leading the charge to Snowdon. For those not familiar with the route, the Watkins path up Snowdon has all the feel of a national park mountain trail yet it leads to a formidable ridge that splits racers opinions between terrifying and exhilarating. Crib Goch can transform an individual’s race; get a few sure-footed lines to start with, nail a few moves and one grows in confidence, speed and somehow size – feeling like a giant straddling the knife edge. However, start off with a slip or a bad line that slows progress to a crag-bound halt and confidence ebbs and that feeling of being a tiny spec on the skin of Mother Nature can take over, leaking minutes here there and everywhere. Experienced climbers and fell runners fond of deeply technical terrain took advantage of this and established gaps on the competition that were never closed. Skyrunning UK regular Adam Firth spoke in awe of his plan to try to follow LSU RD Charlie Sproson over Crib Goch, but within the first minute he could no longer see him.

Despite the best weather forecast I’ve ever seen for the V3K the weather systems refused to play ball, leaving the visual gratification for scaling these tops hidden from view. The fog stubbornly held around 800 metres for the best part of the race disorientating and adding moisture to the rocks. The scree descent off Crib Goch offered a thrilling ride, descending out of the cloud and back to the relative safe feeling of the mossy grass. Taking care to avoid the buttress, the competitors were rewarded with a rapid descent and a bit of respite before the never ending climb to summit Elidir Fawr. The first to see the Nant Peris aid station were Michael Jones and Gareth Hughes, once again battling it out for the V3K title having come third and first respectively in 2015.

The fog on the Glyders left runners feeling like they were trapped inside a ping pong ball. I picked up with the runners on the summit of Tryfan with most looking disorientated but focused and/ or deliriously happy! Mike Jones was the first to appear through the fog, looking in total control as he did so. Expecting the next runner to appear within 10 minutes our astonishment grew as we realised just what a performance Mike had put in so far; it was almost half an hour before a very happy Bjorn appeared in second place followed relatively swiftly by Mark Davies. The fog swirled in and out and clumps of runners started to come through. Beth Pascall passed through leading a group of four runners and clearly in charge of the ladies race. No longer able to contain myself I set out with Charlie as he passed through. Many were cramping badly by this stage adding spice to an already rather treacherous descent off Tryfan when at speed. The moist rocks soon gave way to a grassy descent and welcome marsh to cool the feet off. 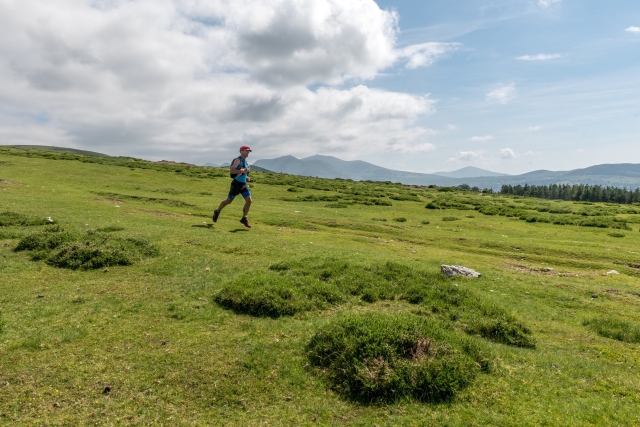 Food at Llyn Ogwen was superb, a definite bar raiser for any event! Caffi V had covered all bases with a tremendous variety, Chocolate and coconut balls, anything salty and fresh fruit were the order of the day though, ensuring all water bottles were charged for the notoriously dry Carneddau. Pen yr Ole Wen is the last major climb of the day and psychologically it can feel like you’ve cracked the course, but like I found out competing in 2014 the race is very far from over. The fog was still hanging down making it terrifically hard to judge where you are. I couldn’t help feel it was a great shame for the competitors not to get the mind blowing views stretching from sea to Snowdon’s summit, however speaking with many of the competitors later on in the blazing sunshine I found none complaining about the weather, more feared/ experienced cramps that would have been far worse if they had been in direct sunshine – arguably adverse weather conditions for UK racers! 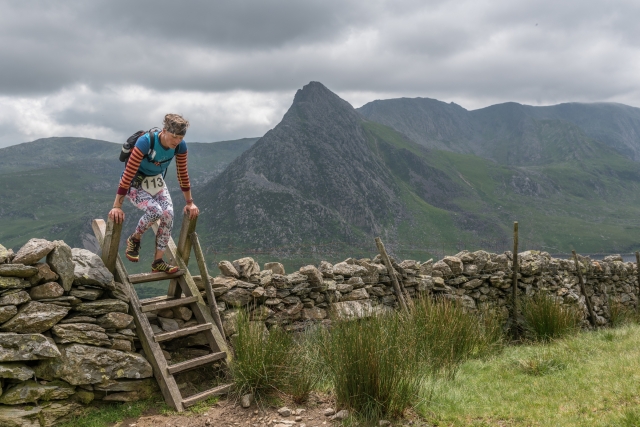 Out on the course I caught up with Skyrunning UK and V3K regular Boris Gaspar. Boris summed up why he loves Skyrunning and ultra running in general. The knowledge that your sole focus is the run and the route; the ability to put the rest of life into perspective; the need to connect with the more primeval side we all have. Ultra trail running manages to give him all that, but running in the mountains and along exposed ridge lines add that essential connection with nature, the reward for climbing a challenging mountain, to feel big and oh so small at the same time. Taking on the journey, connecting with environments we think we know or exploring totally new ones through fantastic race routes other kindred spirits have created is what makes the races in the Skyrunning calendar so appealing; sentiments I can’t help but completely agree with.

In the end the spoils when to Mike Jones in a stellar 7:46, over an hour ahead of Bjorn Verdujin in 8:55 and local fell runner Mark Davies in 9:03. Skyrunning UK’s series sponsor Raidlight saw their very own Beth Pascall (9:24) take the ladies title. Leading from the start Beth looked in control throughout. Second lady sporting a huge grin at the finish was Katie Boden in 10:06 followed by Sarah Sherdin in 10:31. Superb performances throughout. With bands, beers and a finishing feast that could turn anybody vegan I think it’s fair to say this is a really special event.

The V3K route absolutely captures the Skyrunning ethos and, for me, is the finest classic one day route in the UK. The knife-edge of Crib Goch, the higgledy-piggledy boulders and slabs of the Glyders, the epic fast ridge of the Carneddau all add up to a thrilling and exhausting challenge that simply has to be experienced. Once the competitors have picked themselves up from the floor I’m pretty sure they will find it almost impossible to resist the draw of the next challenge in the series. For those with the necessary skills the Lakes Sky Ultra has just 15 places left before sell out so those interested will need to sign up very quickly indeed!. I for one can’t wait to see my Skyrunning UK family again.

Many thanks to Raidlight for the continued support and sponsorship