Posted on August 9, 2016 by Skyrunninguk 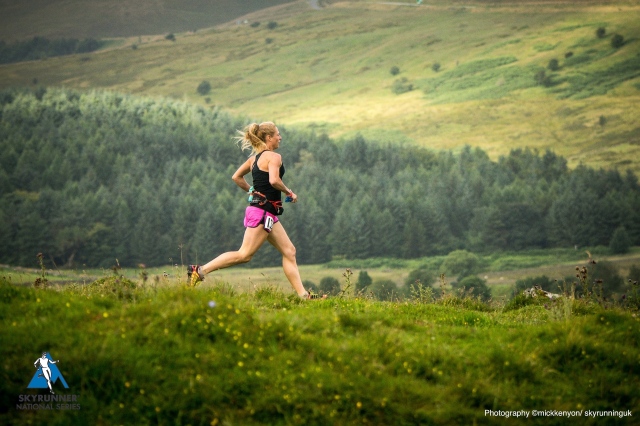 This year saw 180 people register for the Peaks SkyRace the third race in the 2016 Skyrunning UK National Series. From the 180 entrants, 147 showed up at the start-line on Sunday of which 136 runners crossed the finish-line. Those who had not completed retired due to minor injuries and/or being timed out. All in all this year’s event was a tremendous success with a lot of novices testing themselves on a “runnable”, faster and less technical Skyrunning course than the V3K and the Lakes Sky Ultra earlier this season. Niandi Carmont provides an insight into the Skyrunning action from the weekend.

There were many relieved and happy smiles from runners entering Buxton towards the finish and the feedback received was extremely complimentary and positive:

Well now I’ve managed to remove most of the Peak SkyRace route from my knees, elbows, hands etc. I really need to thank all of the race directors, marshals, supporters for another great event. It just keeps getting better.

Apologies must go out to Forest and Billy for inability to stay upright, thought I’d got that out of my system on the recce!  David Betteley

The course might have been less challenging to experienced Skyrunners but judging from this feedback, it offered a challenge to many yesterday. Michelle Jones echoes his thoughts:

Super tough course, wasn’t sure we were going to finish. We did just about. I think that’s about my limit though!

Hopefully we’ll see Michelle next year to improve on her time?

The day was perfect in terms of weather and temperatures and as predicted the pace set by the front runners was fast and furious from the outset. This was reflected in the times with the top 3 in the general ranking coming in under 5 hours. The race was won with a strong performance from Ben Hukins who took victory in 4:36:12 ahead of Colin Stark in 4:53:42. As predicted flying Dutchman Bjorn Verduijn placed 3rd and the infamous Sarah Ridgeway were in the leading group running strong.

Unfortunately due to the fast pace and concentration waning towards the final kilometres entering Buxton, the runner who was 2nd placed at the final CP missed the markers at a turn where runners would actually retrace their earlier steps of the outbound route and was leading several others right behind. This error led him down a slightly longer route towards the finish.  The next two runners after that group, did see the markers, and as a result picked up several places. Race organisation was quick to react and double-checked the markers only to confirm that there was plenty of tape. An arrow was added for the rest of the field. No doubt more would have come in under 5 hours had they not missed the turn.

As predicted Sarah Ridgeway dominated the female field and did very well in the general ranking coming in third overall, well ahead of second-placed Kate Hastings. Once again she took a whopping 28 minutes of the CR. The top 5 women came in under 6 hours. Well done ladies!

Novice Scott baxter was enthralled by this “taster”:

Just want to say thanks to everyone involved! had a great day yesterday, my first event at this distance, first of many I guess.

Scott has now been bitten by the bug and we will no doubt see him at future UK Skyrunning events.

Some like Andrew Morley were more concerned with post-race nutrition:

I forgot to mention, that chocolate cake at the finish was amazing.

It was equally nice to see that the UK Skyrunning community is very supportive and close-knit. RD Kirsch Bowkler from the V3K volunteered on the course. And the professionalism and dedication of the team of marshals was very much appreciated by the runners:

I really enjoyed the race yesterday. It was very well sign posted and the aid stations were really good with friendly marshals. Mark Boyce

Attention to detail is very important to RD’s Richard Weremuik and Anthony Bethell who have joined forces with course designer Billy Craig to put on a great event. Over the past years they have been very receptive to feedback and fine-tuned their event to meet the needs of participants whether it be facilitating race entry, dealing with race registration, course-marking, delegating to marshals, manning of aid-stations or the welcome on the finish-line.

We always strive to improve route marking, so take all feedback on the chin; good and bad.  We will always react immediately to feedback where we can, or make changes for future editions of the race where appropriate. Richard Weremuik (Running Beyond)

Many thanks to Raidlight UK for the continued support of the

The principal aim of Skyrunning UK is the direction, regulation, promotion, development and furtherance of Skyrunning activities on a UK basis via the Skyrunner UK & Ireland Series.
View all posts by Skyrunninguk →
This entry was posted in Uncategorized and tagged peak district, peaks, peaks sky race, Sky, Skyrunning, skyrunning uk series, skyrunninguk. Bookmark the permalink.