The Skyrunner UK & Ireland  2019 Series moves to Ireland for the first time with the third race, the Seven Sisters Skyline.

Regarded as Ireland’s toughest marathon, the first edition took place in 2018. With 3700m of ascent with lots of soft ground, heathery bog, loose rock and scree, this is no easy challenge. With little or no tracks on the course, apart from North side of Muckish Mountain, and the higher part of Errigal Mountain the route is challenging with some technical sections. 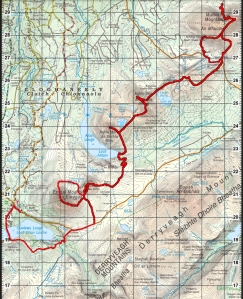 An out and back course going from one peak to the next (13 in total). The current course record 5:59 set by Shaun Stewart and 7:42 for Gillian Wasson.

Excel Sports and race director, Eunan Quinn look forward to welcoming everyone to Ireland’s first Skyline event in Donegal. The race has competitors represented from 12 different countries, with many visiting Ireland for the first time.!

“We have some slight changes from last year,” says Quinn. “The event sees course is now 50km and packs a massive 4,000m of ascent. Spectacular open mountains, isolated, un-spoilt, and runners will see 40 shades of green along the way!”

Gillian Wasson will be back to defend her title from last year, but unfortunately Shaun Stewart is out with a broken collar bone. Kasia Osipowicz will race her third race of the series and will look to set a commanding lead in the National Series. In the men’s race Damien Gielty is entered and could see him take the overall lead in the men’s National series with 2 races remaining after this weekend.

Next race in the Skyrunner UK & Ireland Series is SNOWDON SKYLINE get your entries in now to ensure you have three qualifying races for the 2019 Series HERE.

Importantly, if you are currently ranked top-20 in the male category or top-10 in the female category, it may be possible to facilitate entry for the final race of the series in the Mournes – certain conditions will apply.

The principal aim of Skyrunning UK is the direction, regulation, promotion, development and furtherance of Skyrunning activities on a UK basis via the Skyrunner UK & Ireland Series.
View all posts by Skyrunninguk →
This entry was posted in Uncategorized and tagged apex, donegal, Eunan Quinn, excel sports, ireland, northern ireland, republic of Ireland, seven sisters, SKYRUNNER UK AND IRELAND, Southern Ireland. Bookmark the permalink.